First off I'm a grumpy Brit today, the murk outside my window has turned to sleet, the t-shirts I ordered have arrived after 3 weeks but I have to fork out £15 to collect them, there's nothing remotely exciting on my calender for the next...well..ever....and the monster munch I ate for lunch are giving me a case of roast beef burps.  So, best that I go into nostalgic recollection mode and continue with my convention report: 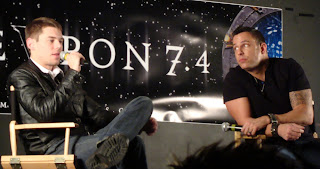 Once again another Stargate alumni was having his convention cherry popped, the lovely Brian J Smith wasn't sure what to expect from the whole convention experience, but this didn't stop him joining us fan girls on the dance floor the night before, rocking and belting out a medley of 80's and 90's rock tunes.  By the time it came to the Q & A he seemed comfortable and relaxed, even with Bam Bam's occasional baiting of 'take your shirt off'...and no, unfortunately all of his togs stayed on.  The chap does find the whole convention thing a tad surreal since a little over a year ago he was working as a bar tender. 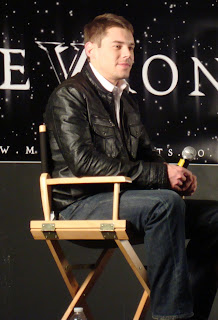 Bam Bam is another guest who I've met at a previous con, he is a chatty bloke and spends a lot of his time with the fans and trying to copy accents...best not to give up you day job Bam Bam ;-)  He played Gambit in X-Men 2 and spent a day of shooting playing poker as well as fight scene and stunt work, but his scenes were deleted...boo, hiss. 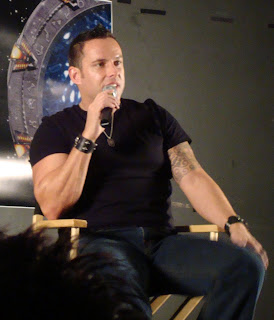 Brian was asked about his fellow cast mates on SG:U and he mentioned having a lot of respect for Robert Carlyle referring to him as 'A sweet, cool guy' who has a lot of time for the cast and crew and is always there to assist with any acting queries Brian may have. (How much would I love to meet Robert Carlyle at a convention....*stretches arms until shoulders pop from sockets*....this much)

Talking about the stunt work Bam Bam said that he keeps the fight scenes looking 'sloppy' in keeping with the raw, realistic theme of SG:U.  More of a pub brawl affair, which in turn leans towards the 'real people' feel and effects of their unplanned situation.  Bam Bam is also giong 'bionic' since injury has led the poor chap to need a double hip replacement, hence why he is co-ordinator of stunts.  From memory I think it was caused by repeatedly having to dive onto frozen ground.


Not entirely sure what Brian is saying to gain this reaction from Bam Bam...answers on a postcard... 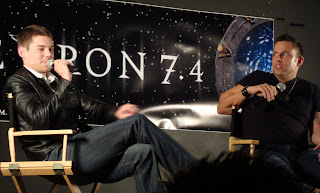 He talked about the dangers of working with actors and them doing stunts...at this point I was sure David Hewlett would come up as apparently his compatability with even the most basic of stunt meet with some kind of injury...though he actually mentioned an incident on the set of The Eye/The Storm.  The lovely Erin Chambers (Sora) had never done any fight training but was keen to have a go, Robert Davi (Koyla) was also keen to strut his stuff but unfortunately got a little gung-ho during the stick fight.  Erin ended up with a fairly decent smack on the noggin and was a bit shocked and upset and retreated to her trailer.  Bam Bam followed with words of support 'Suck it up'.....or something a tad more sympathetic....and the scene, which looks great btw, was completed. 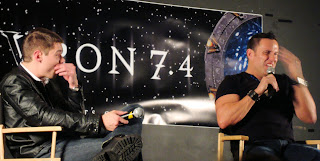 Brain spoke about filming the episode Air Pt 3, the one on the desert planet, which presented a challenge as it was 'understandably hot and sandy'.  117 degrees with no cover and one air conditioned tent for the actors to cool off in, which then became a smoking tent...kind of defeating the objective there I guess.  He said although it was a challenge it was his favourite to film. 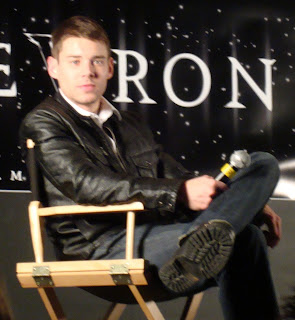 I'm guessing Brian is aware of the conflicting reviews of SG:U, he genuinely wanted to hear our opinons when chatting and said that the next season will address many of the concerns.  He said the show is best watched on DVD (due to being able to watch without annoying ad breaks)...at which point Bam Bam interjected with 'freeze frame for sex scenes' (something which Bam Bam was constantly ribbing Brain about during the weekend) 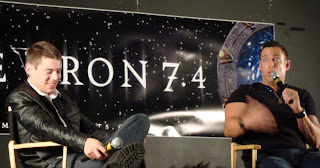 He also once played Simon Cowell...yes you read that right...Simon Cowell in one of those abomination Scary Movies films...where someone machine guns the opinionated tosser down (possibly 3, but I won't be watching to find out, soz Bam Bam)

They both talked about Twitter and how it's a great way to keep in touch with fans and keep up to date with developments on the series.  Although fellow cast mate David Blue (Eli) is apparently addicted and wanders round set asking how many followers  Brain and Bam Bam have...'How long would you like to stay concious'...is generally Bam Bam's reply.

Brian has a, occasionally bossed eyed, King Charles dog called Cassie, who he was looking after for someone else, but missed her too much when it was time to let her go...aw, Brian you big sap you. 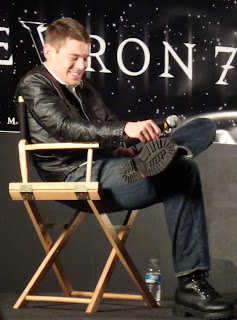 Bam Bam was asked about which actors were easiest and hardest to work with when doing the stunts...now this time David did get a mention, though not that he was hard to work with, but during the scene where he was high on Wraith juice they bascially went with David's own flappy fighting style which 'keeps it real' as McKay.  Rachel Luttrell was easy to work with, her background in dance apparently a beneift to stunt choreogrphy and Jason 'Frickin' Conan' Mamoa who apparently 'brings his own energy...and forehead'.  Apparently his de-dreading during the hiatus of one season led to some trouble (slapped wrist for Mamoa) as the wig he subsequently had to wear would routinely fall off during fight scenes (outtakes please).  Ben Browder is a natural at beating himself up 'Whumping I think you call it.....And he likes it' (okay then).  Joe Flanigan was apparently the person least likely to reherse, he's 'a great athelete' but preferred to play golf, surf or play guitar than reherse a fight scene (slapped wrist for Flanigan).  Bam Bam did a impression of how a day would go with the stunt guys kicking ass...think multiple cartoon ninjas 'hiiii-ya' and other such fighty noises, then as Joe Flanigan stepping in, karate chop 'wah-pah' wipes brow 'we got him'. 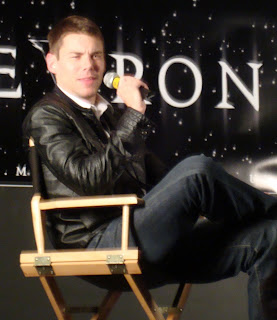 On the Sunday Bam Bam did a stunt demo on stage.  He brought on Sharon and they went through getting into the rhythm of using sticks, which I might add was awesome to watch.  Bam Bam said that working with Sharon was great as she does everything he tells her to do, once while training he told her to take off her shirt...which she then nearly went on to do...bless her, and naughty Bam Bam.  He also spoke about how important the practice is as while training Rachel once made an error in which one of the sticks wasn't protecting her face during a fast run though of a fight and he smacked her cheekbone, she was fine but the subsequent bruise led the make-up girl, his then girlfriend, to chew him out on set. 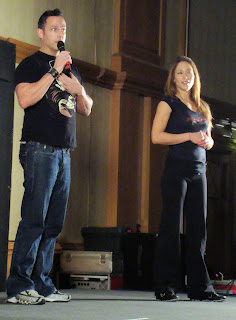 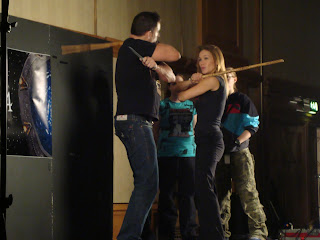 Mates Tina and Philippa were brought up on stage to assist Bam Bam while he was running through a fight routine with Sharon, his dodgy hips means he finds it difficult to kneel and the girls aided the 'old man' onto his knees and back up again....though luckily Tina didn't have to 'Turn left' (those puzzled should look up P4's stunt demo). 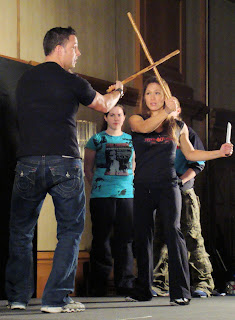 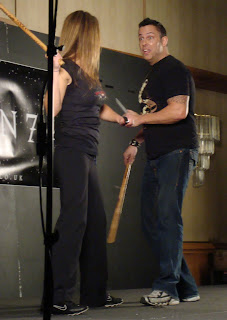 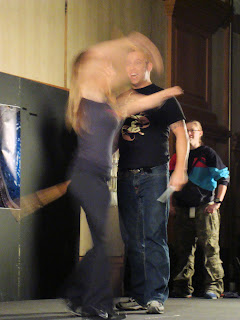 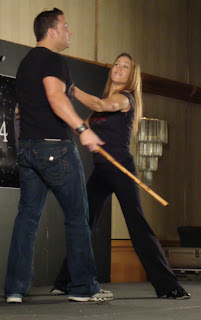 Bam Bam also did a routine with Sharon, Ryan and two stunt guys (James Embree, who's worked on Sherlock Holmes, Merlin and the new Robin Hood film and a guy who was Hugh Jackman's double in the X-Men movies)  He set up two fight scenes which were to be performed simultaneously....'that means at the same time' to Sharon when she forgot to practice while watching Ryan's routine. 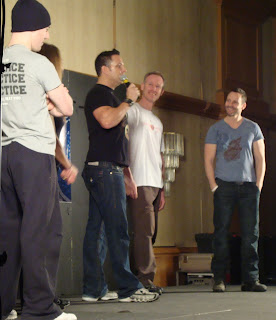 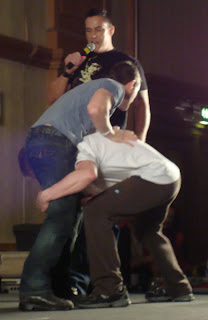 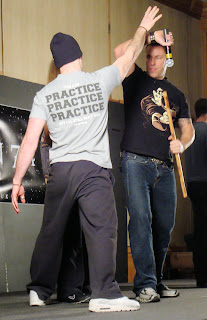 One thing Bam Bam loves to do is micking taking and joshing and there was alot of this during the demo....there was much messing with the 'floppy' knife, mentioning of protecting 'twig and berries' and bemoaning the 'actors'...before the final run through of the 'fight'...which I happened to capture on film.....Shhh.

This one one of my favourite parts of the convention and I hope if Bam Bam visits again this will become a recurring event.  It certainly brings home the art of the stunt performer...two very enthusiatic thumbs up :D
Posted by Emma at 5:40 PM

So they're going to "address" our concerns in season 2? How, exactly?? Hmm, we shall see...

Hehe - I loved the ep with McKay high on Wraith juice. It's like me when I've had any bit of caffeine ;)

Oh, and BTW - kinda turned on by how quickly Ryan flung that guy to the floor ;)

Yep, Ryan's da man....though if you look carefully the guy kinda flips himself onto the floor...grabbing Ryan's arse as he does so ;-) James Embree's complete flip was awesome. He's a lovely bloke too and in the new Robin Hood flick!